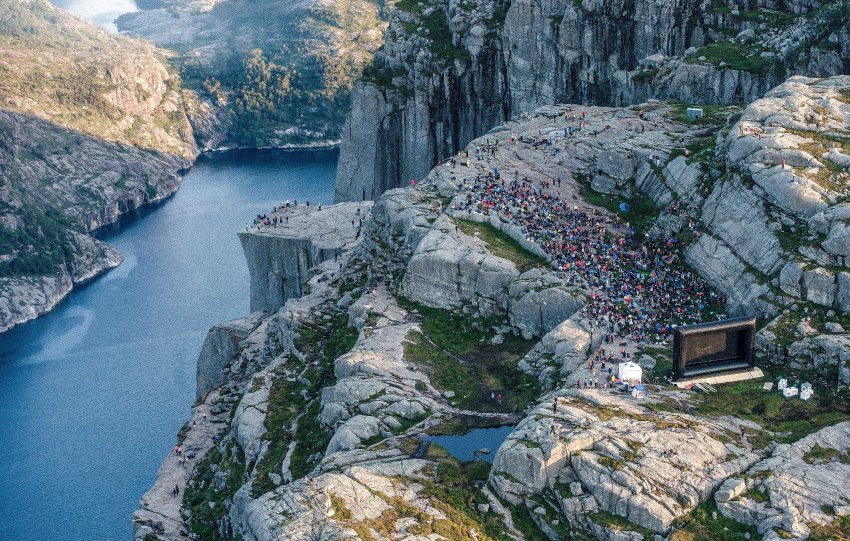 About a year ago, the movie staff of “Mission Impossible: Fallout” filmed during 9 days the final scenes  at one of the most visited places in Norway: Preikestolen. This place is where the impressive final confrontation between Cruise’s spy, Ethan Hunt, and Henry Cavill’s killer, August Walker, takes place. Although the actor Tom Cruise could not attend the premiere he thanked his fans  for attending and regretted not being able to be there through a Twitter post.

On August 1, 2018, 2000 lucky and adventurous fans walked 4 hours to watch “Mission Impossible: Fallout” and possibly live the most extraordinary movie night. The audience had the opportunity to see in person one of the places where Cruise made some of his intrepid acrobatics that are characterized by defying death. After the end of the screening, the mission continued, as all the 2000 spectators walked back in the darkness using head lamps.

A 12m x 6m AIRSCREEN classic was used for this event and was epically transported in a helicopter to Preikestolen. The characteristics of the original inflatable screen made this event possible, as it is rolled up for transport and easily installed in about 3 hours, making what some would consider “mission impossible” actually possible: Watching movies at the imposing Norwegian fjords.

AIRSCREEN supports you in all your “impossible missions” to spread the magic of outdoor cinema. We also want to congratulate our partner Unique Digital Nordic for  such a spectacular event.

Contact us today to make your outdoor film project come true! Click here to take the first step or send us an email to info@airscreen.com,

One thought on “Breathtaking Norway premiere of “Mission Impossible: Fallout””